Promotil Men is a safe and effective way to support male reproductive health and sperm quality by providing the nutrients needed for developing sperm.

Taking Promotil Men can enhance overall sperm quality, increase sperm count, and motility, and all of these factors can help determine a couple’s chances of conception.

Initial results may be seen as early as three months but for, for maximum benefit it is recommended that Promotil Men plus be taken for six months.

Promotil Men is designed to support the healthy formation of sperm and increase both sperm motility and sperm count.

Promotil Men is a food supplement and available without a prescription.

Promotil Men is manufactured in Germany. 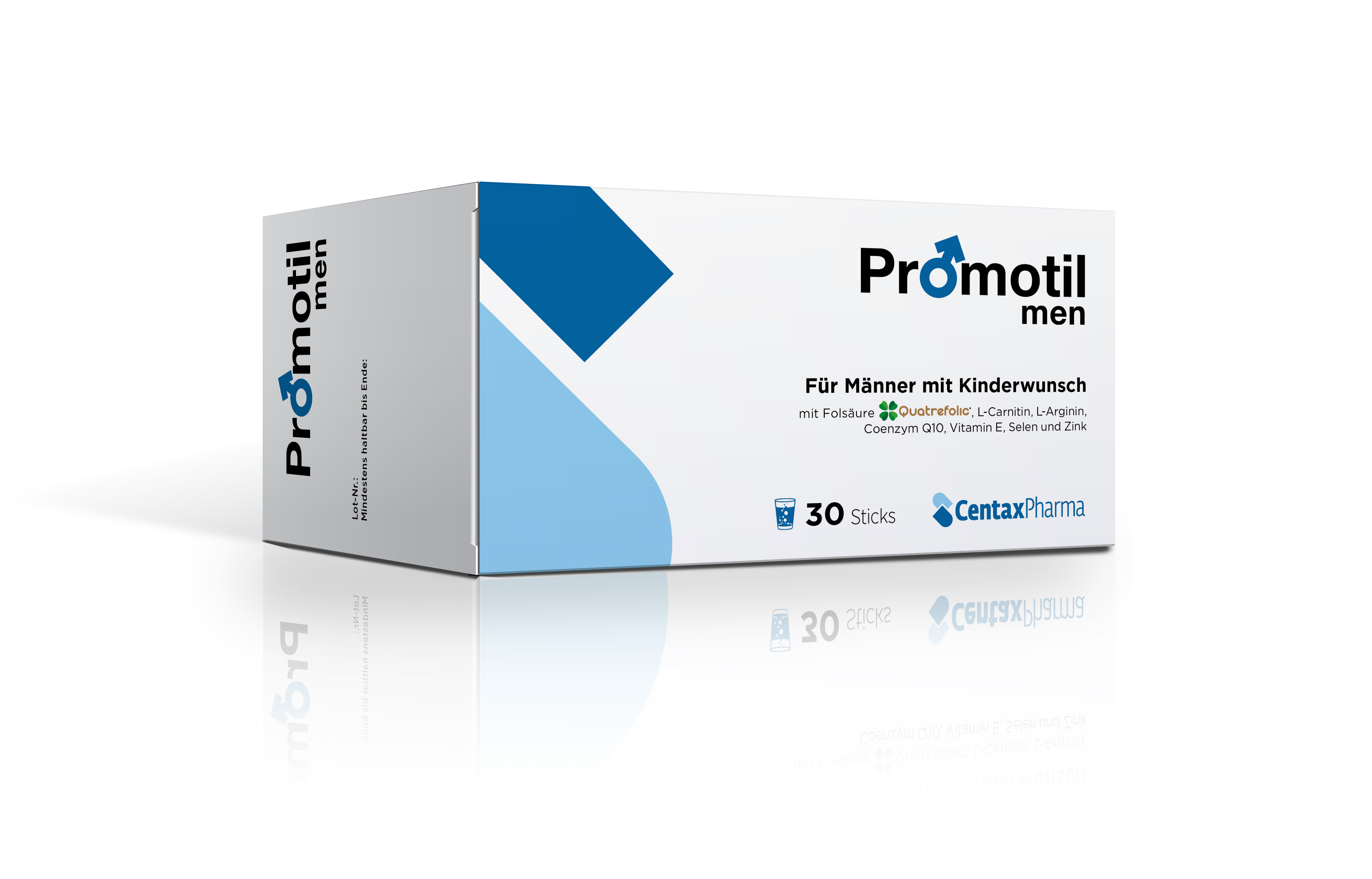 Promotil Men contains clinically proven ingredients and includes an antioxidant complex for protecting sperm from free radical damage as well as additional nutrients for enhancing sperm formation and maturation. Promotil Men is a nutritional supplement that contributes to a man’s overall reproductive health when he’s trying to conceive:

L-Carnitine is a natural substance that can be found in human tissues. The body is able to synthesize this nutrient, but the major part comes from dietary intake, mainly from meat. Foods of plant origin contain very little, if any, L-carnitine. Due to a decrease in meat consumption over the last decade, the average dietary L-carnitine intake has decreased considerably L-carnitine is biologically important for mitochondrial beta-oxidation of long-chain fatty acids and thus for energy generation in the form of ATP.

L-Arginin is a biochemical precursor in the synthesis of putrescine, spermidine, and spermine, which are thought to be essential to sperm motility. More recently, researchers in Italy evaluated the clinical efficacy of arginine in 40 infertile men. All the men had a normal number of sperm ( > 20 million/ml) but had decreased motility which was not due to immunological disorders or infections. Subjects were given 80 ml of a 10-percent arginine HCl solution for six months. Arginine supplementation significantly improved sperm motility without any side effects. (1)

Coenzym Q10 is an anti oxidant and protects the sperms from the damaging effects of free radicals. It has a positive effect in the sperm mobility. Coenzyme Q10 (CoQ10) is an antioxidant molecule, component of the respiratory chain. Recently there has been growing interest in identifying reversible causes of male infertility, and numerous studies have been performed to investigate whether supplementing infertile men with antioxidants can improve seminal parameters. (2)

Vitamin E is an antioxidant that protects the delicate cell membranes against free radicals attacks. Vitamin E combined with Selen can increase the sperm mobility and the amount of normal formed sperms. Oral supplementation with vitamin E significantly decreased MDA concentration and improved sperm motility, resulting in a 21- percent pregnancy occurrence during the study. (3)

Vitamin C is an antioxidant that protects sperms (among others the genetic material) against free radicals. Vitamin C increases the sperm density, their mobility and the amount of normal formed sperms. Studies have shown the concentration of ascorbic acid in seminal plasma directly reflects dietary intake, and lower levels of vitamin C may lead to infertility and increased damage to the sperm’s genetic material. (4)

The B-Vitamins  (Folic acid-Quatrefolic, B6, B12) are important for the cell structure and growth and have a positive effect in the sperm density. Vitamin B12 is important in cellular replication, especially for the synthesis of RNA and DNA, and deficiency states have been associated with decreased sperm count and motility. Researchers reported a significant increase in normal sperm count in subfertile men after they were supplemented with folic acid in combination with zinc sulphate. (5)

Selen is a part of the antioxidant enzyme. The enzyme activity has influence on the sperm’s viability, normal form and mobility. Sixty-nine infertile Scottish men were given either placebo, selenium, or selenium in combination with vitamins A, C, and E for three months. At the end of the trial, both selenium-treated groups had significant improvements in sperm motility; however, sperm density was unaffected. Eleven percent of the participants in the treatment groups impregnated their partner during the course of the study. (6)

Zinc is essential for the male’s fertility. A lack of zinc is associated with a lower testosterone production. Zinc can increase the testosterone level and improve the sperm density. Zinc deficiency is associated with decreased testosterone levels and sperm count. An adequate amount of zinc ensures proper sperm motility and production. Zinc levels are generally lower in infertile men with diminished sperm count, and several studies have found supplemental zinc may prove helpful in treating male infertility. (7) 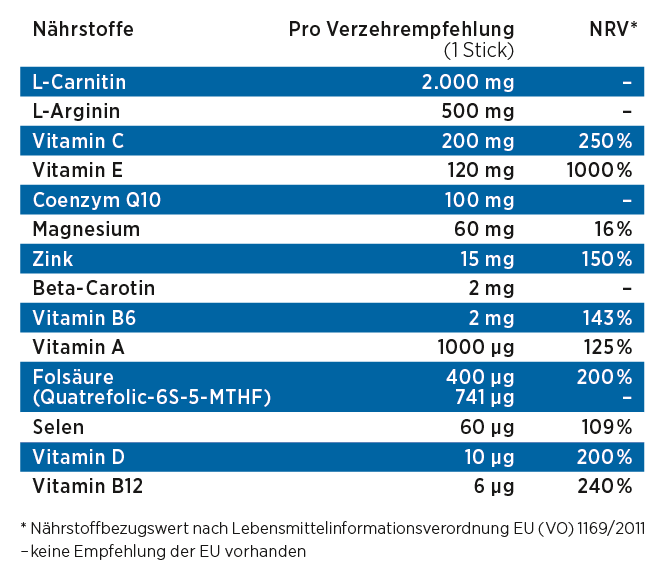 How to use Promotil Men

Stir please a stick in a glass of water (about 200 ml), and take the drink is best before a meal. You can stir with according to taste and juice. Each pack contains 30 sachets and enough for a month. The daily dose may not be exceeded.

Food supplements do not substitute an equilibrated and varied diet nor a healthy form of living.  Food supplements must not replace a varied and balanced diet and a healthy lifestyle. Store below 25°C in a dry place, out of sight and reach of children. 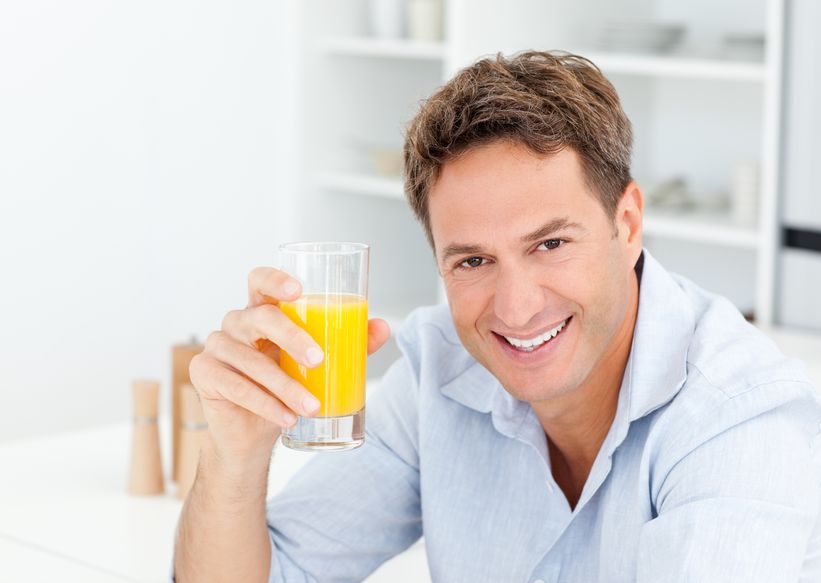 What are the ingredients in Promotil Men?

How many calories in one pocket of Promotil Men?

How should Promotil Men be taken?

Stir please a stick in a glass of water (about 200 ml), and take the drink is best before a meal. You can stir with according to taste and juice. Each pack contains 30 sachets and enough for a month. The daily dose may not be exceeded.

How long will I need to take Promotil Men?

Promotil Men is available as one-month supply (30 Sticks). It is recommended to take one stick per day with some water, with or after a meal.
Promotil Men should be taken for at least 3 months until a pregnancy occurs. The production of sperm takes around 75 – 90 days, so it is highly recommended to take the product at least for three months, and until your partner conceives

Why should I take Promotil Men?

What are ROS, free radicals and oxidative stress?

Oxidative stress occurs when the production of potentially destructive reactive oxygen species (ROS) exceeds the bodies own natural antioxidant defenses, resulting in cellular damage. Oxidative stress is a common pathology seen in approximately half of all infertile men. ROS, defined as including oxygen ions, free radicals and peroxides are generated by sperm and seminal leukocytes within semen and produce infertility by two key mechanisms. First, they damage the sperm membrane, decreasing sperm motility and its ability to fuse with the oocyte. Second, ROS can alter the sperm DNA, resulting in the passage of defective paternal DNA on to the conceptus. This review will provide an overview of oxidative biochemistry related to sperm health and will identify which men are most at risk of oxidative infertility. Finally, the review will outline methods available for diagnosing oxidative stress and the various treatments available

What role do L-Carnitines-Carnipure play with the male fertility?

An emerging body of scientific evidence shows L-carnitine’s ability to help support male reproductive health. In infertile men, the concentrations of L-carnitine in seminal plasma are significantly reduced as compared to healthy men. Generally, L-carnitine supplementation is associated with significant increases in sperm concentration and count, percent motile sperm, and percent sperm with rapid linear progression. Since it is widely accepted that reproductive efficiency is highest for individuals with good nutritional status and health, and since this supplement has a role in supporting sperm health, supplementation with Carnipure may be recommended to males interested in promoting their reproductive health. (8)

What role do L-Arginine play with the male fertility?

L-Arginine is required for normal spermatogenesis. Over 50 years ago, researchers found that feeding an arginine-deficient diet to adult men for nine days decreased sperm counts by approximately 90 percent and increased the percentage of non-motile sperm approximately 10-fold. Oral administration of 500 mg arginine-HCl per day to infertile men for 6-8 weeks markedly increased sperm count and motility in a majority of patients, and resulted in successful pregnancies. (9)

Are there any contraindications or any side effects to taking Promotil Men?

All ingredients are safe and approved micronutrients and phytochemicals without side effects. They can generally be taken over a very long period of time without concern.

There are no known side effects or interactions. If you are taking medication, please consult your doctor or pharmacist.

It is not a pharmaceutical drug classified as food supplement, therefore available without prescription in pharmacies

How much Promotil Men should I order?

How do I order Promotil Men and other Centax Products?

What ist the self-life of Promotil Men?

How much does Promotil Men cost?