Sperm are the male reproductive cells. To have a child, genetic material from the sperm must combine with the genetic material from an egg, in a process called fertilisation. Healthy, fully developed sperm are very small (0.05 millimetres long) and cannot be seen by the human eye. Sperm are highly specialised cells and are made up of three parts: a head, neck and tail. In the head is a structure called the nucleus, which contains 23 tightly packed chromosomes (genetic material). The head is designed to bind to and then penetrate (enter) the egg. The neck of the sperm joins the head to the tail. The part of the tail nearest the neck contains the mitochondria, which provides the energy for the sperm to move. The tail moves in a whipping motion to push the sperm towards the egg.

How are sperm made?

Spermatogenesis (sperm production) is a continuous process with millions of sperm being made each day after puberty. Within the testis, sperm can be at different stages of development. It takes about 70 days to complete the development of sperm that are able to swim and fertilise an egg. The germ cells in the lining of the seminiferous tubules divide over and over again to make sperm. The process starts with the earliest germ cell, called a spermatogonium. These dividing cells pass through many stages and undergo a major change in shape, from a round cell (spermatid) to the familiar ‘tadpole-like’ sperm. Sperm developing in the lining of the seminiferous tubules are supported by larger cells called Sertoli cells. When mature, sperm are released from the Sertoli cell into the lumen (the space in the middle) of the seminiferous tubules to pass out of the testes.

How many sperm are needed to become pregnant?

The ejaculate of fertile men contains tens of millions of sperm. However, men with much lower numbers of sperm can still achieve pregnancies. Men who never have any sperm in their ejaculate are sterile and cannot cause a pregnancy without some form of treatment.  (10) 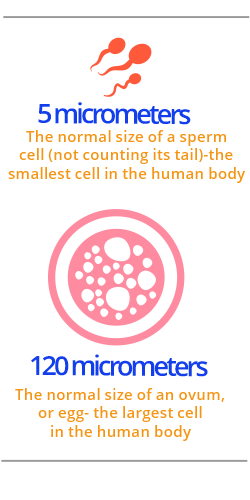 It is estimated that 40–50% of human infertility is entirely or partly related to deficiencies in sperm quality or, more specifically, to problems with the number, motility, or shape of sperm. (14) Semen analysis gives an indication of the type and severity of the issue and is considered to be an indirect assessment of fertility potential. A number of measurements taken during semen analysis help to determine semen and sperm quality. (14) These include:

– Sperm concentration – the number of sperm per milliliter of semen

– Morphology – the percentage of sperm with a normal shape

There is a growing body of scientific evidence supporting the idea that sperm counts have declined considerably over the last 50 years. Carlsen et al analyzed a total of 61 studies including 14,947 men from the years 1938 to 1991, for mean sperm density and mean seminal volume. Their results show a significant decline in mean sperm density from 113 million/ml in 1940 to 66 million/ml in 1990 (p<0.0001). Seminal volume decreased from an average of 3.40 ml to 2.75 ml (p=0.027).  This demonstrates a 20-percent drop in volume and a substantial 58-percent decline in sperm production in the last 50 years. Three other recent reports also found semen quality has declined among donors over the last 20 years. Because the decline in sperm production is relatively recent, one must suspect a combination of environmental, lifestyle, and dietary factors might be interfering with spermatogenesis. (15) 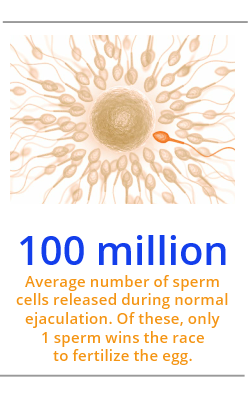