As a whole, antioxidants are substances which get rid of, feed on, as well as subdue the development of ROS, or oppose their activities. The major anti-oxidants are vitamin A, vitamin E, beta-carotene, vitamin C and the trace mineral selenium. A variety of nutritional treatments have actually been revealed to improve sperm matters, and sperm motility, consisting of carnitine, arginine, zinc, selenium, and vitamin B-12. Antioxidants like vitamin C, vitamin E, glutathione, as well as coenzyme Q10, have actually likewise verified helpful in treating male’s inability to conceive. (16)

Vitamin E: Vitamin E (α-tocopherol) is a chainbreaking antioxidant found in the sperm’s cell membrane and acts by neutralizing H2O2 and quenching free radicals, hence halting chain reactions that produce lipid peroxides and protecting the membrane from the damage induced by ROS. Furthermore, it improves the activity of other scavenging oxidants. In these ways, vitamin E helps to preserve both sperm motility and morphology. (17)

Vitamin C: Vitamin C (ascorbate) is another chain-breaking antioxidant that plays a significant role (up to 65%) in combatting OS in the seminal plasma. It reacts with OH-, O2-, and H2O2 in the extracellular fluid, thus protecting sperm viability and motility. However, vitamin C is only a weak ROS scavenger in the cell membrane and, hence, has almost no effect within the cell. (18) 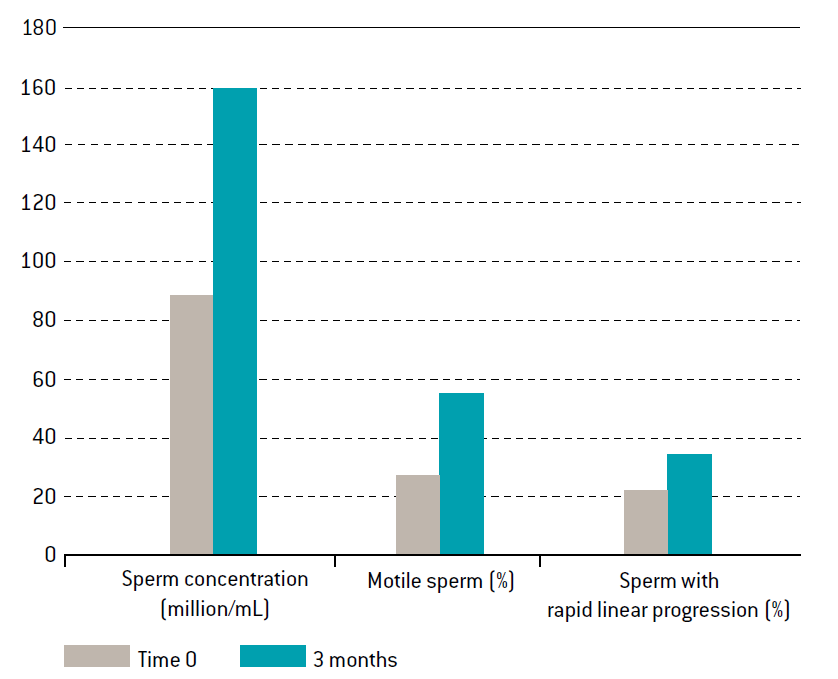 L-Arginine: L-arginine plays a key role in modulating host defences and cellular immunity and L-arginine is considered a semi-essential amino acid because even though the body normally makes enough of it, supplementation is sometimes needed. It also actively participates in sperm formation. A deficiency in L-arginine causes derangement of sperm metabolism leading to decrease in motility, loss of spermatogenesis and increase morphology abnormality. (20)

Carotenoids: Although carotenoids have short half-lives, they are very effective and efficient singlet molecular oxygen quenchers. Two major carotenoids worth mentioning are β-carotene, which prevents lipids in the cell membrane from being peroxidized, and lycopene, which is the most potent and readily available carotenoid that prevents peroxidation in the seminal plasma. (21)

Folic acid and zinc: A 26-week, double-blind, placebo-controlled trial compared the effects of treatment with zinc (66 mg of zinc 22 sulfate, supplying 15 mg of zinc), folate (5 mg), and zinc plus folate against placebo. A total of 108 fertile men and 103 men with impaired fertility (“subfertile men”) participated in the study. The two supplements combined significantly improved the sperm count and the percentage of healthy sperm in the subfertile men; neither supplement alone produced this effect, and there was little effect of the combined therapy on fertile men. Another study also found potential benefit with zinc plus folate. (22)

Coenzym Q10: In sperm cells, coenzyme Q10 (CoQ10) is concentrated in the mitochondrial mid-piece, where it is involved in energy production. It also functions as an antioxidant, preventing lipid peroxidation of sperm membranes. When sperm samples from 22 asthenospermic men were incubated in vitro with 50 microM CoQ10, significant increases in motility were observed. CoQ10 (60 mg) was given to 17 infertile patients for a mean 103 days, and although there were no significant changes in standard sperm parameters, there was a significant improvement in fertilization rate (p<.0.05). In another study, 10 mg/day of coenzyme Q7 (an analog of CoQ10) was given to infertile men, with resulting increases in sperm count and motility. (23)

Vitamin B12:  Vitamin B12, in its various forms, has been studied for its effect on male infertility. Vitamin B12 is important in cellular replication, especially for the synthesis of RNA and DNA, and deficiency states have been associated with decreased sperm count and motility.Methycobalamin was given to a group of infertile men for a period of 8-60 weeks. They were evaluated periodically by semen analysis, an standart sperm parameters were increased by 60 percent. Vitamin B12 was administered to men with a sperm count less than 20 million/ml. By the end of the study. 27 percent of the men had a sperm count over 100 million/ml. (24) 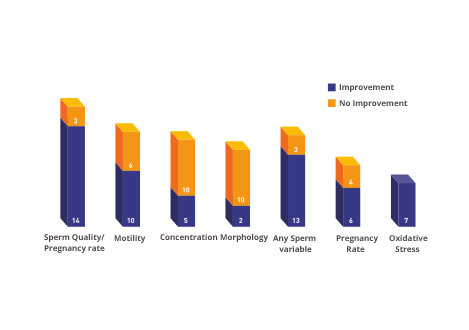